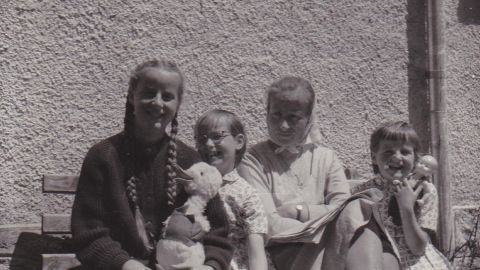 Interview with Helga Costner, the former owner of Ütia Crëp de Munt
27 May 2016
Interview and text by Heidi Niederkofler

The history of Crëp de Munt Mountain Hut starts in 1953, the year of its construction. The prior origins, as usual, are somewhat unclear: already before the construction there had been a small hut, located at a certain distance from the arrival point of the ski lift. Germano Costner, the founder of Crëp de Munt, changed the site and built the new mountain hut in its present location after having bought the land plot from its former owners from Platten (Plata).

Germano Costner was born in 1918 in Colfosco, where he grew up together with 16 brothers and sisters. As a young man he qualified as a ski instructor and a mountain guide and gained wide practical experience in Breuil-Cervinia in the Aosta Valley (Valle d'Aosta). After his return to the Badia Valley in the status of an expert mountain guide, he rented in 1950 Pisciadù Mountain Hut, that he managed during the summer season for the following 30 years together with his wife Gretl Gassner Costner, born in 1918, and their daughters Edith, Helga, Elfriede and Claudia.


In summer, the whole family lived and worked up in the mountains, in Pisciadù Mountain Hut and, in winter, turned to live in Colfosco: Gretl took care of the family and Germano worked as a ski instructor. The Mountain Hut Crëp de Munt that belonged to the family since 1953, was leased till 1966. Sometimes it was rented to youth groups for summer holidays.

After several tenants, in 1966, it was time for the eldest daughter, Edith Costner, at the age of almost 20, to take over the hut's management. To facilitate the task, the family bought from Giarone Costamoling the already existing ski lift that led directly to Crëp de Munt.

The last owner of the Mountain Hut, Helga Costner, joined her sister in their family business in 1970, after having worked for 6 years in the kitchen of a hotel in Sterzing (Vipiteno). At first, the work in the isolated and very primitively equipped hut turned to be a tough challenge for Helga:

"I wasn't ready for working in a mountain hut. We were there all alone, during the first years there was neither tap water, nor electricity. Water was carried up from the valley. In winter water tanks were placed on a sledge and drawn up by the ski lift. Wood was used for both heating and cooking, while candles and gas lamps were the only source of light in the night time. Everything that was required in the hut, had to be brought up: in summer we could use a ropeway but in winter it was impossible. So everything was taken up by the ski lift or in a backpack carried up by a porter or by our father. "
Sisters Edith and Helga Costner lived during the whole season in the mountain hut, together with a porter, the rest of the staff and two ski lift operators. Evenings were spent playing cards in the light of a candle or a gas lamp.

At first, the mountain hut had only 3 indoor tables and a tiny outdoor terrace, but the Costner sisters never lacked for work. Edith and Helga were doing their best to take maximum advantage of the limited resources. The kitchen was equipped with just two gas burners and a wood-fired oven. Dish washing was set up in a makeshift manner: on two chairs there stood two big bowls, one for washing dishes and the other for collecting the clean ones. The waste water was simply dumped into the toilet, namely outhouse.

The hut was famous for fried eggs with bacon on roast potatoes. The menu also featured vegetable soup with or without sausage, spaghetti with ragout, würstel sausages with potatoes and sauerkraut, goulash with dumplings. When guests asked how the sisters made their dumplings, quick-witted Helga used to answer: „Round!"

As there was no tap water and electricity, Crëp de Munt for many years had no coffee machine. So the Costner sisters had to offer their guests something special instead and they really did. It was Gamsmilch ("Chamois milk"). This hot alcoholic drink, prepared with a generous portion of egg liqueur, was destined to become one of the hut's main specialities. Helga Costner doesn't reveal the exact recipe, it has always been and still remains a family secret.

Over the years, the Mountain Hut became bigger and also better equipped. At the beginning of the 1970s a water pipe was laid and the hut got connected to electricity supply. The dining room, the toilets and the cellar were built in 1981 and the terrace was enlarged in the mid-1980s, while the kitchen was finally rebuilt in 1995.

However, in 2013 Helga Costner decided to sell the Mountain Hut, where she, her father and her sisters had been working for so many years. When asked if she regrets having sold Crëp de Munt, she answers simply: „Yes and no."